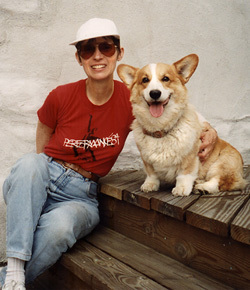 Their book, Junkyard Bandicoots and Other Tales of the World's Endangered Species, was published by John Wiley & Sons, Inc.

In a chapter of the book, Chicken Soup for the Pet Lover's Soul, Richard and Joyce told the story of how a Pembroke Welsh corgi, Nosmo, decided they should be the new people in his life.

The American Society of Journalists and Authors awarded them the June Roth Award for Medical Journalism for their story in the Smithsonian magazine, about a day in the life of a hospital. This story, which also received the Clarion Award, grew out of Joyce's own treatment for acute myelogenous leukemia.

Currently, both Joyce and Richard have taken new directions in their writing.

Joyce is working on a true story, about a Pembroke Welsh corgi, who came into her life and helped her survive leukemia.

Richard has returned to an original interest, fiction. So far he has published five novels.

Two of his books are fantasies--Wil Deft and Sinnabar. He also has published two anthologies of his short stories, Frankie & Johnny, & Nellie Bly, and Riders of the Dust-Gray Steppe.His stories also appear in a variety of literary journals.

A speculative thriller, Caliban Rising, is set on a Caribbean island.

Currently on the workbench are further novels, under construction.