Junkyard Bandicoots & Other Tales of the World’s Endangered Species 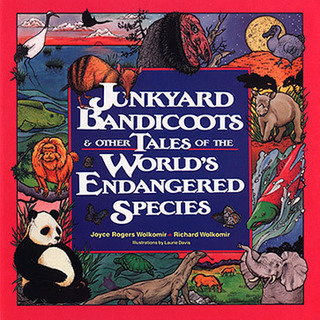 SEA OTTERS ARE SWIMMING BACK
A newborn sea otter pup floats alone in the Pacific, crying for her mother. But her mother is gone.

The pup was a twin, and mother otters can care for only one pup at a time. This mother otter clasped the first of her newborns to her chest and swam away. Now the second pup floats alone, off the California coast. Special baby fur keeps her afloat like a cork. But, alone, she will starve.

She is lucky. A wildlife official spots her. He rushes the orphaned pup to California’s Monterey Bay Aquarium, which specializes in caring for orphaned otters. But the pup—one day old and only 2 ½ pounds—is the tiniest otter the aquarium staff has ever seen.

Volunteer otter-sitters and aquarium workers care for her around the clock. They brush and comb her. From syringes, they feed her an otter “milkshake,” a mixture of clams, squid, fish oil, milk, vitamins, and minerals. Because the pup repeatedly spills her food on herself, she is named “Milkdud.”

Milkdud sleeps on a waterbed. She learns to swim in a saltwater pool. And she plays with rubber balls and Frisbees. An older aquarium otter, Hailey, becomes Milkdud’s substitute mother, grooming and protecting her. Hailey even lets Milkdud steal food from her. As Milkdud grows, she moves to a large outdoor tank stocked with kelp, snails, crabs, and sea urchins.

Today Milkdud is one of four sea otters exhibited at the aquarium. All orphans, they cannot be released to the wild because could not survive on their own. But now the Monterey Bay Aquarium has developed a method for preparing otter pups for a return to the ocean. A human “mother” swims with the young otters in the ocean by the aquarium, helping them learn to find food and adjust to the wild. The aquarium as successfully returned several otter pups to the Pacific. Its goal is to help bring back the southern sea otter, an animal that almost disappeared.

In 1741, Russian explorers discovered sea otters in Alaska. Within 50 years, fur traders had nearly exterminated Alaskan sea otters, hunting them for their luxurious coats. The traders moved south to California, killing otters up and down the coast. By the early 1900s, everyone thought the California sea otter had been hunted to extinction.

However, in 1915, scientists saw otters in an isolated California inlet. Laws now protected otters. But the scientists feared uncaring people would ignore the laws, so they kept their sighting of the otters secret.

Today, California sea otters are making a slow comeback. Over 2,000 otters now live in colonies along the central California coast.

Scientists studying California sea otters find they spend much of their time near the shore in kelp, a marine plant that grows from the ocean floor. Kelp forms dense forests in the ocean. To rest, otters drape themselves in kelp strands to keep from drifting. Otters often rest in groups, called rafts.

California sea otters are about the size of basset hounds. They have whiskered snouts, stubby front paws, and webbed hind flippers that look like baseball mitts. Whales and seals—also sea mammals—keep warm with layers of blubber. But the sea otter relies instead on its thick, water-resistant fur. Otters actually have two layers of fur. One is an outer layer of coarse guard hairs. These protect and waterproof a second, inner layer of dense hair called underfur. This underfur has up to one million hairs per square inch. A dog has only 1,000 to 60,000 hairs per square inch.

The sea otter spends a lot of time grooming and cleaning its thick fur. It vigorously rubs it fur with its forepaws and then somersaults and barrel rolls in the water. This enables the otter to trap air bubbles in its fur. These air bubbles keep the otter warm and dry. Otters also have special oil glands that help make their fur water repellant.

An otter’s paws and hind flippers are hairless. To keep them warm, otters often swim on their backs, holding their paws and flippers up in the air. Some rest their front paws on their eyes.

Otters are among the few mammals that use tools. As they swim on their backs, they keep a flat stone on their bellies. They bang clams, abalone, mussels, and other shellfish against the stone to crack the shells. Then they eat the meat inside. They also eat sea urchins and crabs. One female wild otter in Monterey Bay carries a glass coal bottle on her stomach. She found the discarded bottle in the water and uses it to pry shellfish out of rock crevices. Now her daughter uses a cola bottle, just like Mom!

Female otters are devoted mothers. A pup spends most of its time riding on its mother’s belly, learning the complex skills it needs to survive. A pup learning to eat will pretend it has a rock on its belly and wave the food in the air, imitating the pounding motions its mother makes to crack open shellfish. Because of the special natal fur that keeps it afloat, a pup cannot dive for the first three months of its life. Instead, it sticks its head underwater, like a snorkeler, and watches its mother forage for food. Male otters sometimes snatch pups from their mothers. The male holds the pup hostage until its mother ransoms the pup by give the male food.

Otters eat up to eight pounds of food a day. For a person, that would be like eating 140 hamburgers every day. Otters keep warm by burning calories rapidly. In fact, sometimes otters eat so many shellfish, like abalone, that commercial fishermen are annoyed.

Oil spills threaten otters. The spilled oil quickly mats an otter’s fur, destroying its insulation. Within hours, the otter freezes to death. When the otter tries to lick its soiled fur, it ingests the toxic oil. Hundreds of Alaskan otters died after the tanker Exxon Valdez spilled over 10-million gallons of crude oil into Alaska’s Prince William Sound.

Protected, California sea otters are making a comeback. Scientists who study them believe the otters may survive.