THE LUCK OF TUX 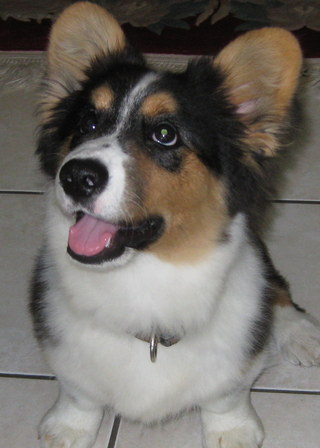 Tux When We First Met Him

Tux, the Cardigan Welsh corgi, needed a new home, and that would be iffy.

It would be iffy because, despite being a little charmer, Tux was a little dickens. It also would be difficult because Tux lived with Pam, and she wouldn’t let him go just anywhere.

We first got to know Tux when he was still a puppy—we’d been visiting in Florida that winter and heard about a neighborhood couple with a new corgi. Joyce allows no nearby corgi to go unvisited, if she can help it, so we met Pam and Wayne, and it led to a warm friendship.

Pam and Wayne were Conchs, which is what Key Westers call themselves. They told us wonderful stories about Key West, back in the Hemingway days. They’d brought Tux into their home late in life because Wayne really wanted that dog. Tux turned out to be an imp, super smart, the Energizer Corgi, with a PhD in play and mischief.

Tux runs to his toy box, selects a favorite, plus another, plus a third, manages to stuff all three toys into his mouth, then runs to present them to you, a demand to play multiple-throw-the-toy, or wrestle-for-the-toy.

Tux knows he’s forbidden to climb onto the bed in the guest bedroom, so he slyly waits until nobody’s watching, then jumps on the bed and exuberantly tosses the pillows.

Lots of such things.

Wayne got sick. He fought it, lived far longer than the doctors said he would, but it turned out to be one battle a former Army special forces soldier couldn’t win. At Wayne’s final moment in life, Tux let out a wail.

Now it was just Pam and Tux. A question hung in the air: what if Pam, now alone, no longer could care for Tux?

That day came—Pam, too, fell ill. She no longer could live in her home.
Where could this high-energy corgi find a new home?

Pam had stipulations. He needed a fenced-in yard, where he could safely play. There must be kids in the home. There should be another dog, too, although that might be a problem: Tux liked some dogs, disdained others. A home that already had a corgi would be best, especially if that corgi was close to Tux’s age.

From her hospital bed, with Tux unhappily ensconced in a kennel, Pam desperately tried to find such a home. It seemed hopeless.

Then, unexpectedly, Tux’s vet called: she knew a family in North Carolina, and maybe….

This family consisted of a mom and dad, three young daughters, and a female Pembroke Welsh corgi, just Tux’s age. They had a fenced-in yard. For three years the husband had been seeking a male corgi. Outnumbered in his all-female household, he wanted at least one other male on board.

Mom, dad, and their resident female corgi all drove to Florida to meet Tux, at the kennel, to see if this could possibly work.

Maybe our friend Tux understood he needed a new home. Maybe, no matter what, he wanted to get out of the kennel. For whatever reason, when the family arrived, although it must have strained him, Tux was on his very best behavior.

A getting-to-know-you hour ended with love all around. Tux enthusiastically jumped into his new family’s car and off they all drove, north to North Carolina.

Pam called us, knowing we worried about Tux. Here’s her report—

Her niece mailed Tux’s new family a big box full of his pedigree papers and his favorite toys. Also in the box was a jacket Pam had sewn for him, with a Welsh flag on one side, because he’s a Welsh corgi, and a Scottish flag on the other, honoring Pam’s and Wayne’s own heritage.

Tux knew that jacket. When his new family put it on him, they wrote, he “strutted all around the house like a little prince.”

And there is more good news. Pam now lives in Virginia near one of her sons and his wife, and—slowly—she is regaining strength. She has grit. She has a strong spirit.

Thank you for this beautiful account of the Wayne, Pam and Tux family! Pam, as well as all who knows them, were worried about Tux, and, would have taken him in if he had not found the perfect home! Although we all love him dearly, none of us could have given him the wonderful home he has now. These precious people have played a huge part in Pam's recovery. She knows Tux is loved and happy.

So happy for our little Tux!!!