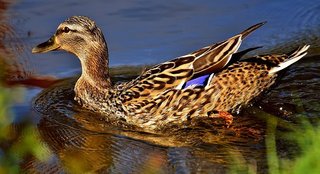 I’m looking out my home office window and on the far bank of our large pond I see 15 ducks sitting in a row. Clearly they hatched this spring, and now they’re the equivalent of human teenagers, so full of energy they race every which way, on a whim.

They flew in four weeks ago, at first just a few, but more kept coming. The attraction? Our apple trees.

Now, as if they discussed it, they are suddenly waddling towards the apple tree at the bottom of the lawn, near the pond. For a few weeks now it has been dropping its apples.

Our ducks seem to be a mix of wood ducks, black ducks, and mallards, all supposed to swim in the shallows, tails tipped up, heads underwater, munching pond grasses off the bottom. We’ve never seen them tipping at all. For them, it’s all about apples.

At first, the apples puzzled the ducks. How do you eat these things? Eventually, they found the secret—spear the apples with your bill.

Yes, the ducks actually do this. We have watched them, apples stuck on their bills, like clown noses, waddling at great speed towards the pond, to escape their fellow ducks, who have not succeeded in spearing the apples and want the apple-catching ducks to share. They tear off bits of the apples to eat, although many apples end up bobbing in our pond when the ducks try to free the apples from their bills or to snatch another duck’s apple.

Deer, too, like to gather at the apple tree to munch, but the ducks resent these apple rustlers, and they do something about it. One duck, who we call Braveheart, marched right up to two does, with some of her more timid followers lurching behind her. She walked closer and closer to the deer, until she stood defiantly under their noses. Then she speared an apple from between one doe’s hooves and marched away. Once a fawn came to the apple tree with its mother, and when the ducks waddled toward it, the startled fawn jumped backward, and then bolted for the forest.

It’s not always apples. Sometimes, at high speed, the ducks zig and zag all over our large lawn. It’s hard to see why, except that they’re teenagers. That’s why they have so much energy.

At some point, they will fly south. We will miss them.