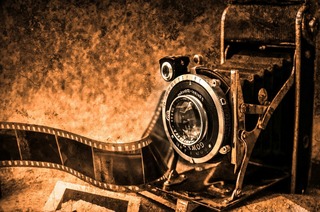 We’ve been doing some autumn cleaning, looking into attic boxes and little-used drawers and closets, and we’ve found that, never realizing it, for decades we’ve been hoarders of our own lives.

We’re human packrats, we’ve discovered, hiding away bits and pieces of the past, and then forgetting where we put them, or even that we ever hid them at all.

Here’s an old photograph of Joyce’s grandmother and friends, when they were young. They wear white neck-to-toe dresses, and they all look like Emily Dickinson clones, or people in a Merchant-Ivory historical drama. In fact, they were real people, busy with horse-drawn carriages and coal stoves and wintertime sledding parties. People from another world.

Here’s a letter my father wrote to us, stashed in a box and forgotten: “We enjoyed everything this past Christmas…we are in good health including the cats. Considering the fact that my hair is thinning out I finally bought myself a hat…”

Here’s a photo of Joyce’s mother, a bride, radiant….

Memories, like raked leaves in an October wind, swirl up.

So I’m asking myself: are we precisely this—a trunkful of memories? Learning to drive standard shift? Skating on the river, over rushing black water? That time you….

Why do we save these things?

Here’s a letter from my childhood friend Neal, now dead in Alaska, because his wife died and, after a few months, he decided not to go on. When I spoke to him last, he asked if I ever thought of the war game we kids played, when I shot him in the eye with a bb gun? Every day, I said. Every day.

Theater tickets, boxing gloves and fencing foils in a box….

If we didn’t save these things, would the memories they embody fade? And then, because those memories are us, would we fade, too? When our memories are gone, aren’t we gone?

Here’s a photo of Joyce as a two-year-old. She’s staring fixedly at her birthday cake, and pointing at it. It seems meaningful, that pointing.