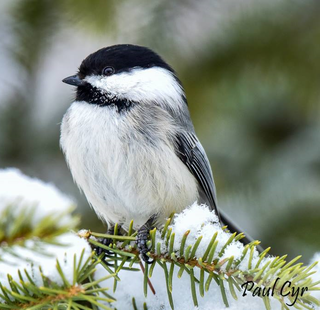 I'd spent all morning on the telephone—for an article, I interviewed an eminent physicist, whose theory is stunning: consciousness, he told me, is a fundamental force, like gravity. Our thoughts help shape the universe.

It fogged my head.

So I escaped outside, to breathe frigid January air, hoping to clear my brain.

In our meadow, tracks crisscrossed the snow, white-tailed deer, red foxes, fishers….I imagined myself one of these creatures, in the oncoming sub-zero night. I'd shiver in a thicket, gazing up at a black sky, and icy stars.

Then I heard a cheerful "Chick-a-dee-dee-dee."

It perched in a nearby bush. Turning its head, the chickadee aimed one tiny obsidian eye at me. It turned its head again, to study me with its other eye. What to make of this lumbering beast, in Arctic boots and a silvery parka?

I had a feeling about this atom of feathered fluff—for right now, at least, it was a friend.

Impulsively, I reached out my arm and extended my index finger. Now the chickadee contemplated my finger, turning its head to give each eye a view. Decision made, it fluttered off its twig, hovered, then landed, its feet curling around my finger like tiny hands. Its black-dot eyes gazed into mine, curious.

It rested on my finger for what seemed forever. Then the bird repeated its message.

Its feet uncurled and it fluttered up, hovered a moment, eyeing me cheerily, then flew out across the meadow snow, until—just a dot—it disappeared among dark maple trees.

I thought of that physicist. If he had it right, just now two separate consciousnesses teamed up to make adjustments to the Milky Way. To some tiny extent, we shifted the cosmos.