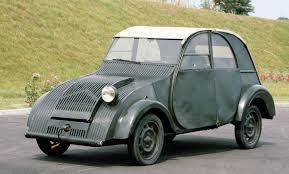 Just one rental car remained on the island—A 1950 Citroen 2cv.

It looked its age, olive-green, battered, seemingly made of tin cans, with what looked like a lawnmower engine.

Take it or leave it.

Well, hadn't we flown to St. Maarten for a mid-winter refresher? New experiences? Without wheels, we'd be stuck on the coast, amidst high-rise resorts and time-shares.

Where was the adventure in that?

So we rented the 70-year-old zombie car. We headed  inland—ignoring the car's hiccups—to see what we might see.

What we saw, miles into the island's interior, was smoke billowing from under the Citroen's hood. Then the engine died.

Empty hills to the horizon. No cell phone service.

One hill back, we'd passed an isolated tavern. Joyce stayed in the car, while Richard trudged back along the road, to find help.

Inside the dark tavern, a big man stood behind the bar. More large men occupied the seats. When Richard walked in, all eyes focused on the interloper. Richard asked the bartender if there was a telephone he could use.

A silent stare. Then a slow head shake, no. Richard sensed that, even if there was a phone, the answer was no.

He explained about the comatose Citroen. Any garage nearby?

Trudging back down the hill, Richard tried to guess how many miles they'd need to walk, back to the coast. And when it would be night.

He glanced back—two of the tavern's biggest patrons followed him down the hill. He walked to the car, thinking hard.

His only idea: tell Joyce to lock the doors. But the Citroen's doors had no locks. And then the two men from the tavern stood looking down at him.

After a silent moment, one man unlatched the Citroen's hood and peered inside. He reached in a hand. Finally, head still under the hood, he spoke: "Shoelace."

It would be best, Richard decided, to offer up the sacrificial shoelace. Under the hood, the man did something mysterious with the shoelace. Then he stuck out  his arm and twisted his hand, the message clear: turn the ignition key. Richard got in. He turned the key.

A sputter, and the Citroen started.

A moment later, both men were walking up the hill. Richard ran after them, pulling out his wallet.

They looked back, saw the offered bills, and shook their heads. No.

Shrugging, they accepted the bills. Then they turned and trudged on up the hill, back to the tavern.