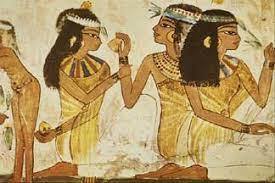 We flew to Egypt to see temples and obelisks, tombs, giant stone pharaohs, and people who died thousands of years ago, wrapped in linen.

Our boat, featured in the movie Death on the Nile, reconditioned (sort of), took us upriver toward Sudan, through places where no tourists go.

On a hill paralleling the river, a little boy rode a burro, eyeing us—across his lap, a Kalashnikov automatic rifle.

Farther on, we foundered on a sandbar, and a farmer and his wife brought basketfuls of dates, gathered from their palms, and pleaded with us on the boat to accept their gift.

We chugged on, until our engines got the vapors, forcing us to dock at a city nobody ever heard of, with perhaps a million residents, and virtually no contact with the larger world.

Joyce joined a number of other women from the boat to take a walk through town. Quickly, young men and boys surrounded them, staring and clapping and chanting. Joining arms, the women pushed through the crowd and power-marched back to the boat, and safety.

Richard, meanwhile, also took an exploratory walk. Somewhere in that city, a Jeep drove up and pressed its front bumper an inch from the back of his legs. Two men in uniform inside, with suspicious eyes, indicated they needed his passport, which he had no intention of surrendering. With an affable smile, and hand signals, he suggested he'd go back to the boat to fetch it, although it was in his back pocket.

All the way that Jeep pressed its bumper against the back of his legs.

Finally, repaired, the boat got underway—next stop, the Valley of the Kings.